The word comes from the Turkish "quzzaq" which means adventurer or free man. There's a haze of romance surrounding these tough warriors who can ride horses like the best. They lived quite isolated in the southern steppe region of Eastern Europe, Ukraine and the Asian part of Russia. Through their lives in the middle of nowhere they have developed their own culture and tradition that expressed themselves in a certain way of life, their own songs, clothing, etc.

The Cossacks also maintained great cleanliness with the furniture and cooking. Their hospitality was and still is great, but this is the case throughout Russia and Ukraine, as visitors to these countries may have experienced. The Cossacks have always been loyal to the Tsar. They were part of the Tsar's guard. They formed regiments, especially cavalry, and guarded the borders at the request of the Tsar. In times of unrest, the Cossacks helped the Tsar to keep the rebellious population under control and during wars they helped, for example, to drive the Turks out of the country and to destroy Napoleon's armies. Loyalty to the Tsar was rewarded with a great deal of independence enjoyed by the Cossacks. For example, they liked the Tsar's raids, as long as it was not on Russian territory. When fishing for sturgeon in the fall, the first serving of caviar was always sent to the Tsar in St. Petersburg. The honor was great when a Cossack officer was selected for this. If a criminal or someone in debt or bankruptcy joined a Cossack group, he was safe. The Cossacks would never send anyone back. When landlords or government people tried to retrieve their runaway or fled-back husbands, the Cossacks told them, "S'Donu Vydachni njet," no one is being extradited from the Don.

There are thousands of Cossack songs, not all of which are on paper. There was singing during the daily work. The dark and cold evenings were killed with music. The text was often made up, as well as a melody. Tradition has given the songs a place in culture: peasant songs, sailor songs, love songs, hunting and robber songs, war songs, party songs and hymns. As instruments that are still used today can be mentioned the goesli (zither), domra, balalaika and bandura (strumming lutes), sopèl and dvodensjtsjivka (flutes), doeda (bagpipes), serna (oboe), shaleika (clarinet), rosjok ( trumpet) and the bajan (Russian accordion). Conductor Arkadi Gankin of the Alphens Cossack Choir is a professional player of the Bajan.

At a young age, the Cossack was encouraged to sing in a choir. It is therefore no surprise that the culture of choral singing was also highly developed among the simple Cossacks. As a result of the Cossack's role in the 1917 revolution, Cossacks were exterminated or deported. But the Cossack spirit, the traditions and especially their music turned out not to eradicate. Cossack songs are one of the most important elements of their ethnic identity. There are of course the necessary differences in style. The songs of the Don Cossacks are mainly melodious choral songs. The basses always have an important role. When performing a Cossack song, one should be able to hear a beautiful, deep bass. 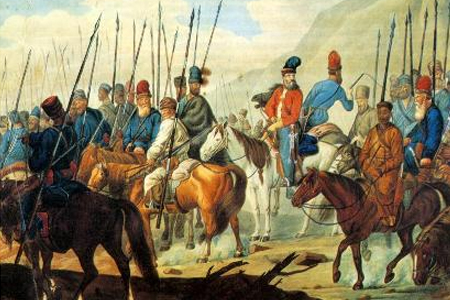 The most typical in Cossack music is the so-called "Scottish" scale, performed on only the black keys of the piano. Where the ear is used to the harmonic combination of the classical musical scale (with eight notes), this five-tone system gives the melody a special color. Russian choral music is popular all over the world because of its unique, beautiful sounds. Many professional choirs come on tour to Europe from Russia, Belarus and Ukraine. In the European countries themselves and also in our country there are many choirs that specialize in Byzantine-liturgical choral music and Cossack songs.

The Alphens Cossack Choir has enthusiastically started to contribute in its own way under the musical direction of Arkadi Gankin to the corn culture of Alphen aan den Rijn and the surrounding area.

Cossacks in the present dayDuring the rise of the red rule of Lenin, the Cossacks took the side of the Tsar and thus of the Whites. The communists won, the Tsar family was massacred, and the Cossack culture came under heavy fire. During the Soviet era, the number of Cossacks decreased from an estimated 11 million to 140,000. When Perestroika flourished, it was Boris Yeltsin who rehabilitated the Cossacks in 1992. In today's Russia, the Cossacks are given the space to implement a degree of new independence and they are working hard to provide a financial basis for this.

An important activity of the current, still remaining, Cossacks is the recently established Nevoskif company. This group includes two security companies (Grom and Rosich) that protect almost half of St. Petersburg's business life. The mafia is quiet. The mafia knows that she gets in trouble if she gets in the way of Cossack security. If things really go wrong, the security guards can enlist the help of their families from distant Cossack regions. The population trusts the Cossacks more than the local police. This also has to do with the honesty of the Cossacks. A Cossack is honest. Nevoskif has bought land near Pskov, where Cossack families are building a new life. Cossacks still guard borders. For example, they are involved in controlling smuggling between Estonia and Russia.

Now also Alphense CossacksAnd now, since May 2007, there are also Alphense Cossacks: the Alphens Cossack Choir. The choir was co-founded by the first chairman, Bas de Wit, who died in 2014. Here, too, a male event led by the Belarusian conductor Arkadi Gankin. The choir now has 36 members. Performances and concerts are given regularly. The repertoire varies from Byzantine-liturgical music to Cossack songs. The choir sings exclusively in Russian.Those who are interested in organizing or organizing a concert by the choir can contact the board.

Various internet sources were used for this article. Gabby de Jong, among others, keeps an excellent site about the history of the Cossacks.